The store will not work correctly in the case when cookies are disabled.
American Parks Company Logo

The 12 Types of Play and What They Mean for Children 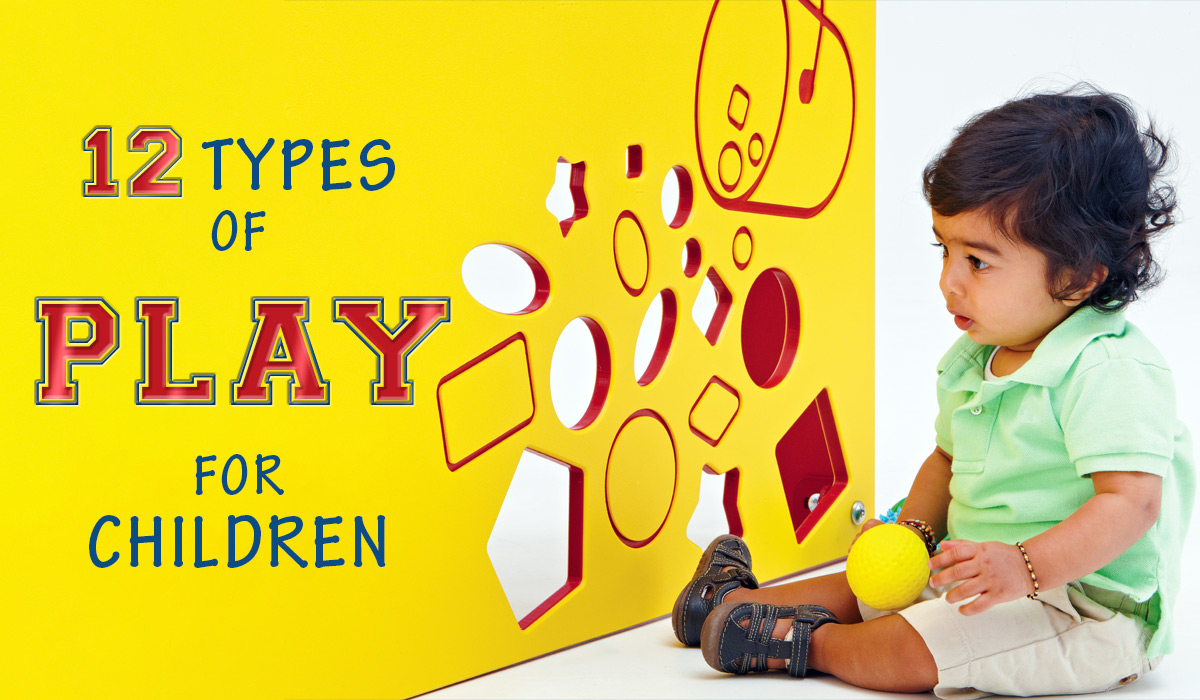 In the 1930s, researcher Mildred Parten defined play as six stages which mirror children’s social development. Unlike Jean Piaget who saw children’s play in primarily intellectual or cognitive developmental terms, Parten emphasized the idea that learning to play is learning how to relate to others. As children grow and develop, play evolves. Certain types of play are associated with specific age groups, although all types of play occur at any age. Play is how children interact and explore the world, and different types of play are needed to fully engage a child’s social, physical, and intellectual development.

Generally found from birth to about three months, babies busy themselves with unoccupied play. Infants appear to make random movements with no clear purpose, and may appear to only be observing, but this is the initial form of playing.

From three to 18 months, children will spend much of their time playing on their own. During solitary play, children do not seem to notice other kids sitting or playing nearby. They are exploring their own world by watching, grabbing and touching objects. They can often become deeply immersed in the activity, “tuning out” the world around them. Solitary play begins in infancy and is common in toddlers. However, it is important for all age groups to have some time for alone play.

Onlooker play happens most frequently during the toddler years. A child watches other children play and acquires new language skills through observation and listening, while learning how to relate to others. Although children may ask questions of other children or make comments, there is no effort to join the play. This type of play usually starts during toddler years but can take place at any age.

From the age of 18 months to two years, children begin to play alongside other children, often mimicking them, but without any interaction. Parallel play provides young children with opportunities for role-playing. It also helps children gain the understanding of the idea of property ownership, including the concept of what is “theirs” and what belongs to “others.”
This is also when they begin to show their need to be with other children their own age. Parallel play is usually found with toddlers, although it occurs in any age group.

When children are around three to four years of age, they become more interested in other children than their toys. Children start socializing with other children. Associative play is when the child is interested in the people playing but not in coordinating their activities with those people, or even necessarily organizing their activities at all. Associative play helps children further develop the art of sharing, language development, problem-solving skills and cooperation. During associative play, children within the group have similar goals. However, they do not set rules and there is no formal organization.

Children around the age of three are beginning to socialize with other children. They are interested in both the children around them, and in the activities they are doing. By interacting with other children in play settings, a child learns social rules such as give-and-take and cooperation. Children begin to share toys and ideas, and follow established rules and guidelines. They begin to learn to use moral reasoning to develop a sense of values. Activities are organized and participants have assigned roles. Group identities may emerge, as with make-believe games.

Beyond Parten’s Stages, play can also be described by these additional categories or types of activities children can engage in during play.

When children run, jump, and play games such as hide-and-seek and tag, they are engaging in physical play. Physical play offers a chance for children to develop muscle strength, coordination, and exercise and develop their bodies appropriately, while maintaining healthy weight. Children also learn to take turns and accept winning or losing.

In this type of play, children build and create things. Constructive play starts in infancy and becomes more complex as your child grows. As a toddler, children begin building things with blocks or stacking toys, drawing or stacking loose parts like wood or pinecones on the playground. During constructive play, children explore objects, discover patterns, and problem solve, to find what works and what does not. They gain confidence manipulating objects, and practice creating ideas and working with numbers and concepts.

Children learn to create and imagine beyond their world during fantasy play. They may assume adult roles and learn to think in abstract ways. Children stretch their imaginations and use new words and numbers to express concepts, imaginations and historical concepts. Children can re-enact situations, experiment with languages, and learn to express emotions during fantasy play. They can also work out emotional issues by projecting them onto a fantasy situation.

Competitive play begins in the late preschool period. The play is organized by group goals and established rules. There is at least one leader, and children are definitely in or out of the group.
Children are moving from a self-centered world to an understanding of the importance of social interactions and rules. Part of this development occurs when they learn games such as Tag, Follow the Leader, Simon Says, and team sports. Games with rules teach children the concept that life has rules that everyone must follow.

When children play electronic video games or computer-based learning programs, they are engaging in a form of solitary play. There is no social interaction or consequences. If excessive, virtual play often negatively impacts a child’s executive functioning and social skills, including eye contact and attention span.

It is important to allow children to engage in all of these styles of play for their overall emotional, intellectual, and physical development. Many of these styles of play will begin in the home, but some types can only begin in pre-schools, daycare centers, or out in public parks and on the playground. Ensure your child’s well-being by noting which styles of play have yet to be introduced at home, and offer them the chance to grow by visiting your local park or playground.